I Lost My Body

Do That Crazy Hand Jive

The entrancing, Oscar-nominated animated feature I Lost My Body has a knowingly macabre premise: As the title suggests, this is the tale of a disembodied hand that is searching Paris for the human to which it was (until quite recently) attached. It’s a surreal concept that feels like something born at the whimsical yet grimy confluence of Pixar and Jean-Pierre Jeunet. Lo and behold, I Lost My Body’s co-writer Guillaume Laurant has also had a hand in scripting several of Jeunet’s features, including The City of Lost Children (1995), Amélie (2001), and A Very Long Engagement (2004). Laurant, in fact, is the originator of the story, as he adapted I Lost My Body’s screenplay from his own 2006 French-language novel, Happy Hand.

However, although one can discern the writer’s fingerprints in the film’s cockeyed wistfulness and moody romanticism, I Love My Body is very much a splashy debut for co-writer and director Jérémy Clapin, here helming his first feature after several years on the festival circuit with his award-winning animated shorts (“Une histoire vertébrale,” “Skhizein,” “Palmipédarium”). While there’s an indefinable yet unmistakable Frenchness to the film’s overall sensibility, Clapin also seems to be drawing substantially from late-2010s anime landmarks like A Silent Voice (2016), Your Name. (2016), and Mirai (2018) for his feature’s tone, particularly with respect to its naked yet authentic emotionality and its matter-of-fact depiction of the fantastical. Meanwhile, the film’s bizarre premise feels like an overt nod to Russian writer Nikolai Gogol’s satirical short story “The Nose”; both involve body parts that become separated from their owners and lead an independent existence for a time. There’s also a little bit of Brian De Palma’s audiophile thriller Blowout (1981) in Clapin’s film, which points toward how rich, eclectic, and unpredictable I Lost My Body proves to be. It’s a truly beguiling work, and the best animated feature of 2019 -- hands down.

Clapin has crafted an expressive, structurally ambitious feature that resists easy summation even at the plot level. The film’s far-out gimmick constitutes something of a misdirection: The amputated hand’s Ratatouille-style trek across the rooftops and through the sewers of Paris comprises about a third of the feature’s running time. The majority of the film’s story concerns a young man named Naoufel (Hakim Faris), the original owner of the detached extremity. When the viewer first glimpses Naoufel, he’s laying dazed on the floor of a carpentry shop in a pool of his own blood, his amputated hand lying nearby. How this ghastly fate befell him is the subject of the film’s A Plot, which depicts via flashback Naoufel’s pitiable, calamitous journey to that dusty floor. Meanwhile, the B Plot follows the severed, inexplicably autonomous hand in the present day as it escapes from a medical freezer and makes its way toward its owner, presumably aided by some primal compulsion. (It’s best not to think about the mobility of a hand that’s unattached to a forearm, but instead embrace the film’s faintly absurd magical realism.)

Naoufel is an orphan, his parents having died in a car accident when he was a child. Once he was a joyful, wide-eyed boy who dreamed of being a pianist and an astronaut – not mutually exclusive ambitions in a child’s mind. Now a disillusioned, directionless adult living in Paris with his cold, controlling uncle and boorish cousin, Naoufel makes ends meet delivering pizzas on his scooter. It’s a sign of how unmoored he is in his present state that he's something of a hapless screwup even at this entry-level job. One rainy night, Naoufel makes a delivery to an apartment and, through a series of schlemiel-like misfortunes, ends up trapped in the building’s lobby, conversing over the intercom with his would-be customer, Gabrielle (Victoire Du Bois). She proves to be acerbic but oddly approachable, and the two of them wile away the better part of the evening in a frank, brooding discussion – without ever meeting face-to-face.

Naoufel thereafter becomes infatuated with Gabrielle, using tidbits of information gleaned from their intercom tête-à-tête to track her down at her library job. He then follows her to the neglected workshop of her elderly uncle Gigi (Patrick d'Assumçao), a veteran carpenter in poor health. Through a combination of panicky deceit and pure happenstance, Naoufel talks his way into a live-in apprenticeship with Gigi, mostly as a means to get closer to Gabrielle – who remains unaware that her uncle’s gawky new hire is also her erstwhile pizza deliveryman. The gleaming circular saw in Gigi’s shop serves as a pointed reminder of where Naoufel’s story is headed, but the more active counterpoint to the film’s stalker-ish romance plot is the urban odyssey of the severed hand. Contending with pigeons, rats, dogs, subways, and a curious infant – among other obstacles – the hand leaps, scuttles, and grapples its way through the labyrinth of modern Paris in a manner that’s part “The Red Balloon” (1965), part Evil Dead II (1987), and part Pickle Rick. It’s an imaginative and frequently thrilling feat of microcosmic, non-verbal storytelling, one that never neglects the inherently grotesque qualities of a crawling human hand.

That said, I Lost My Body is a profoundly aching, melancholic story at heart, one attuned to the primacy of sensation in the human experience. Clapin peppers his film with impressionistic flashbacks that evoke the tactile, as though Naoufel’s hand were somehow remembering the texture of sun-warmed beach sand, the comforting solidity of a beloved toy, or the blood-drawing prick of a rose’s thorn. However, the feature is also very much concerned with sound. An analog tape recorder and microphone serve as totems of a sort for Naoufel, providing a link to his deceased parents via a collection of old audiocassettes – one of which preserves the very moment of their deaths. Gabrielle, meanwhile, is identifiable even at a distance thanks to her oversized pink-and-green headphones, an accessory that instantly makes her stand out from the gray Parisian crowds from Naoufel’s puppy-love-addled vantage point. In Gabrielle’s brainy Cool Girl attitude, he senses a kindred spirit. To outsider looking in, however, it seems clear that he’s making too much of their initial, intercom-mediated interaction, however soulful it seemed to him at the time.

Naoufel is a romantic, and there’s something insidiously seductive about falling in love with someone, sight unseen, after a single conversation. (Disembodied voices are as prominent in this film as severed appendages.) However, a skeptic might observe that Naoufel doesn’t really know Gabrielle at all. He was flailing around for a life preserver at a particularly low moment in his life, and he simply latched on to the first person who exhibited a little bit of vulnerability and understanding. Indeed, one of the refreshing things about I Lost My Body as a romantic drama is its unwillingness to let its protagonist off the hook for his creepy, dishonest behavior. The longer Naoufel’s charade goes on, the more unlikely it is that Gabrielle will respond pleasantly to the revelation that his appearance on her uncle’s doorstep was no accident. Even less likely is the possibility that Gabrielle and Naoufel are headed for some happily-ever-after ending, especially given the preordained maiming that looms over the latter. Likewise, even within the miraculous parameters of the film’s fantasy, it’s hard to envision how the severed hand finally being reunited with its body will make everything right again. Both Naoufel and his hand seem destined for disappointment.

Despite this pessimism – not to mention the midnight-movie conceit of a crawling hand – I Lost My Body is a deeply humanistic film, even a sentimental one. Clapin and Laurant acknowledge the human longing for connection with absolute sincerity, sensitively illustrating that all people yearn to be seen, heard, and touched by others. Yet the film also refuses to buy into facile, fairy-tale myths like love at first sight – or the notion that everyone has one perfect soul mate (if only they could find them). When the gooey wreckage of Naoufel’s romantic delusion is cleared away, I Lost My Body’s ethos is similar to that of poet and illustrator Shel Silverstein’s seminal 1976 children’s book The Missing Piece (and its reverse-shot 1981 sequel, The Missing Piece Meets the Big O). Namely, to believe that one can be healed, perfected, or completed by one special person is to devalue one’s own worth. Moreover, such myopia can be a slippery slope that leads to the idealization and objectification of others. Clapin’s film is the rare story that balances this sort of no-nonsense individualism with a poet’s sensitivity toward love, grief, and the kaleidoscopic intensity of simply being alive. 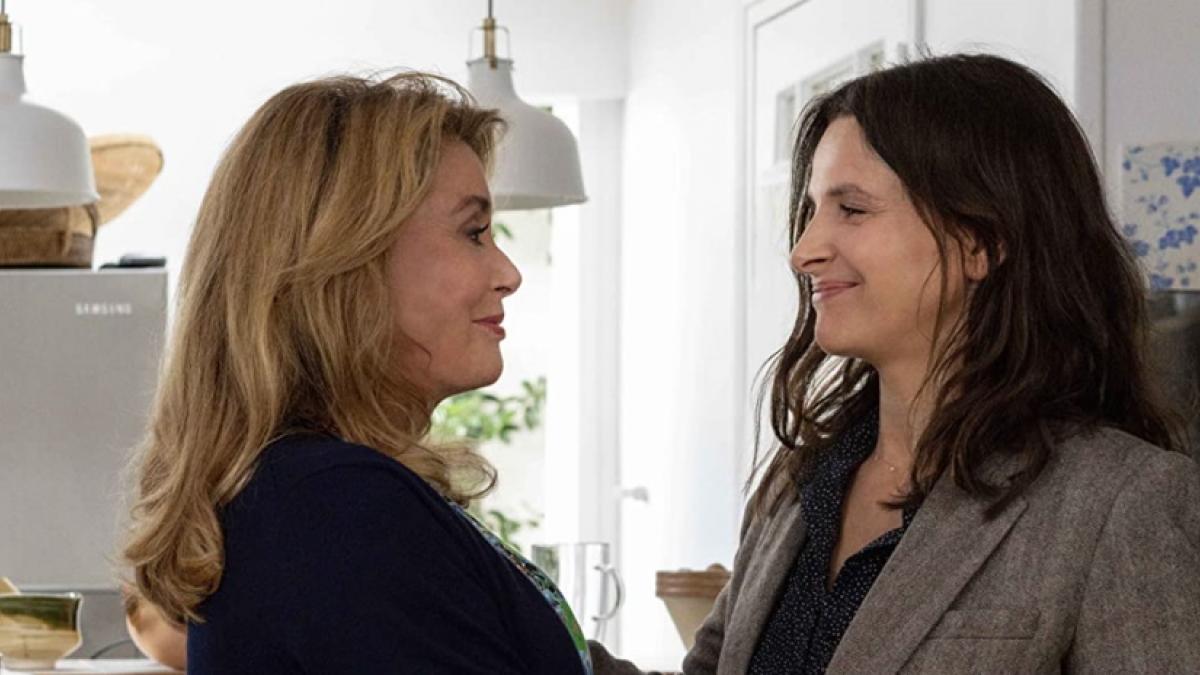