McG’s 2017 thriller-comedy The Babysitter does not have much going for it, but it is at least a tidily self-contained little Satanic-cult story with a few stray moments of goofy humor. (It also serves as a decent vehicle for a pre-Ready or Not Samara Weaving.) The same cannot be said of its pointless and relentlessly grating sequel, Killer Queen. Unfolding a few years after suburban tween Cole’s beloved babysitter Bee revealed herself as the leader of a murderous cabal, the new film follows a hapless adolescent Cole as he navigates bullying and puppy love at a new school. He eventually runs smack into the vengeful, resurrected spirits of Bee’s demonic flunkies, which allows Killer Queen to repeat the plot beats of its predecessor – only in a more tedious, unfunny, broadly unpleasant register. The screenplay is insultingly inane and performatively offensive in the shrill, faux-provocative style of a Beer Fest sequel. It’s a joyless, enervating Bad Movie, drenched in try-hard flop sweat.

The Babysitter: Killer Queen is now available to stream from Netflix.

A chilly, 1990s-set “town with a secret” horror-thriller, Kurtis David Harbor’s Spiral attempts to put a queer spin on a familiar tale of creepy neighbors, occult conspiracies, and convoluted gaslighting. When underemployed ghostwriter Malik (Jeffrey Bowyer-Chapman) moves from the Big City to a quaint little town with his older husband (Ari Cohen) and stepdaughter (Jennifer Laporte), the sinister warning signs begin almost immediately. Although superficially welcoming, the locals ooze homophobic microaggressions – and are concealing some seriously weird religious traditions. Spiral is an agreeably moody piece of indie filmmaking, but unfortunately the story’s mystery becomes less interesting and more ridiculous the more that Malik (and the viewer) learns of it. Bowyer-Chapman does his best to convey his character’s gradual unraveling, but the script is so loaded with clunky, on-the-nose dialogue that it works against his performance. The film ends up feeling like a tin-eared simulation of a provincial homophobic nightmare rather than an authentic evocation of a not-too-distant era.

Spiral is now available to stream from Shudder.

A harrowing woman-vs.-maniac thriller boiled down its lean and mean essentials, John Hyams’ Alone is notable primarily for how ruthlessly it slices away the fat from its elemental survival tale. The viewer learns little about heroine Jessica (Jules Willcox) other than the fact that her husband recently committed suicide and that this tragedy has motivated her cross-country relocation. During her long-haul road trip, she is stalked and menaced by an obsequious creep (Marc Menchaca) with transparently sinister intentions. Intriguingly, Hyams and screenwriter Mattias Olsson disrupt the obligatory captivity-horror sequence, transforming their gloomy, often brutal feature into a wilderness showdown between a banal yet cunning killer and a desperate, astonishingly resourceful woman. Although Alone never does anything all that unexpected, it creates a ripe sensibility of clammy doom that’s uncluttered by superfluous subplots and character drama. Unlike many thrillers of this stripe, Jessica refrains from making silly slasher-film errors, which only amplifies Alone’s grim portrayal of misogynist violence and its long, inescapable shadow.

Alone is now available to rent from major online platforms. 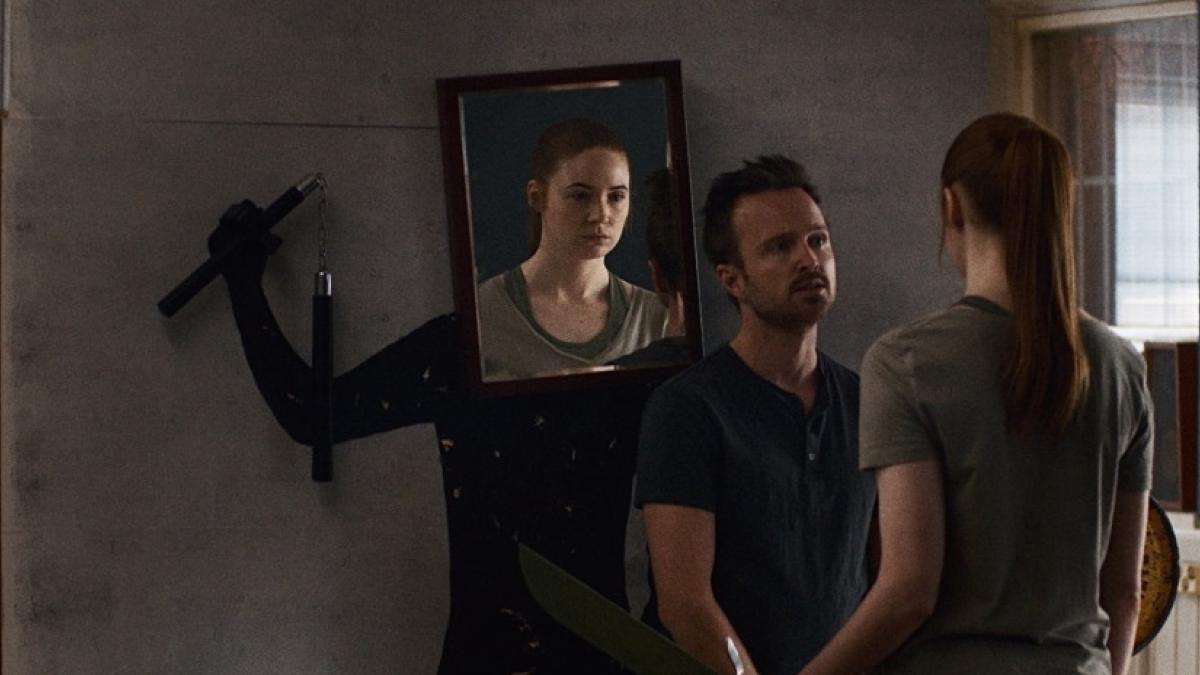